A Guide to Experiencing NASCAR in Cabarrus County, NC

Whether you’re a longtime fan or new to the sport, this quick read will get you up to speed on how to experience NASCAR racing like a pro.

Along with a snapshot of stock car racing’s roots and fast facts about the sport, this article includes information to help you plan the ultimate NASCAR experience in Cabarrus County, North Carolina.

Read on for an outline of Charlotte Motor Speedway’s major NASCAR events, insider tips for visiting the legendary venue and a list of nearby NASCAR-related hot spots you won’t find anywhere else! Plus, each section includes helpful links and extra resources so you can bookmark them and access later. 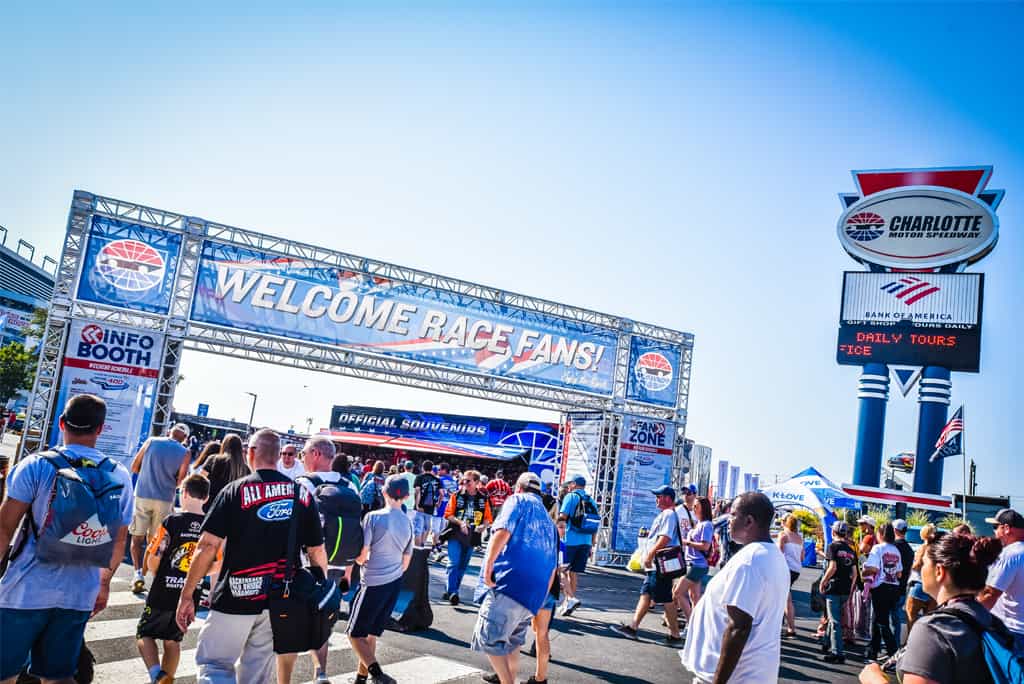 During prohibition, moonshiners needed to outrun the law to deliver their illegal whiskey. These souped up cars and skilled drivers eventually made their way onto the track and stock car racing was born on the beaches of Daytona. Today, the industry continues to bring motorsports-based businesses, aspiring drivers, thrill seekers and fans from all over the world to Cabarrus County.

If you’re new to the sport or just need a refresher, here’s a quick look at NASCAR by the numbers:

1 Champion Each Year, decided after the playoffs. Drivers qualify for the playoffs based on performance throughout the regular season including race wins and finishes.

3 Stages in Each Race which include a predetermined number of laps and have a winner for each stage, denoted by the green checkered flag. Pit strategy plays a role in the excitement as teams decide to stop on pit road for adjustments, fuel and tires at the end of a stage or stay on track to gain position. Action resumes as cars are bunched up for restarts, and the driver leading at the end of the final stage is the race winner. 5 Terms you’ll hear often during a race. Brush up on more lingo with this guide from NASCAR.

10 Flags used to communicate with drivers during a race. Each has a different meaning, and you’ll spot a NASCAR official above the start/finish line frequently waving these five:

Each year, the NASCAR season kicks off with the Daytona 500 in February and ends in November. Teams travel across the country racing at a different track every week. Before the green flag waves, crews prepare throughout the week at their race shops, many of which are in Cabarrus County and the surrounding area. Inside NASCAR Race Shops, you can get a behind-the-scenes look at top-tier teams including Hendrick Motorsports, RFK Racing and Stewart-Haas Racing. When race ready, cars are loaded onto haulers and transported to the track. NASCAR haulers are also impressive machines equipped with everything a team needs to rebuild a car, including a spare engine and backup car. In Cabarrus County, you can get up close and personal with these big rigs during the Haulers on Union Parade & Fan Fest in May as haulers drive through historic Downtown Concord on their way to Charlotte Motor Speedway.

CMS is unique because it features both a speedway and road course. As a speedway, CMS is a 1.5-mile oval with 24-degree banking in all four turns. This helps cars turn but it’s so steep that if you stand on it, you’ll be diagonal! As a road course, CMS is a 2.28-mile circuit with 17 turns called the ROVAL.

Known as “America’s Home for Racing,” Charlotte Motor Speedway has been putting fans first for over 60 years and keeps them coming back with innovative upgrades and unmatched entertainment. Both spring and fall are ideal seasons to visit with these major NASCAR events to plan your vacation around! 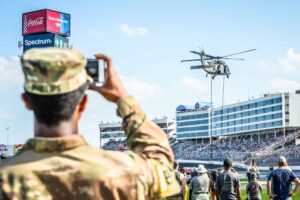 Coca-Cola 600 (Spring)
Cup Series qualifying, an Xfinity Series race and action at The Dirt Track prime fans for an incredible finale—the Coca-Cola 600! This historic event is the nation’s most patriotic sports event and provides an awe-inspiring setting to celebrate Memorial Day weekend. Witness a spectacular salute to our military and see NASCAR’s best drivers tackle the toughest, longest race of the season. 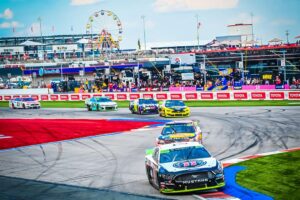 Bank of America ROVAL™ 400 (Fall)
This playoff race narrows the field to eight drivers who can still compete for the championship. The ROVAL is a hybrid course–a combination of Charlotte Motor Speedway’s traditional oval and an infield road course. Before Cup Series drivers beat and bang around this challenging track, the Xfinity Series stars will suit up for a Saturday afternoon showdown. 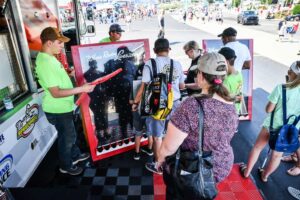 Arrive early! A NASCAR race is an all-day event. Make plans to visit the Fan Zone before the race to enjoy live music, games, food and vendors including the Mobile Visitor Center. Before heading into the track, stop by to play games, win prizes and pick up a free Destination Guide with autograph page.

Located outside Turn 1 near the track’s main entrance, you can walk to the Fan Zone or catch a tram from parking lots. 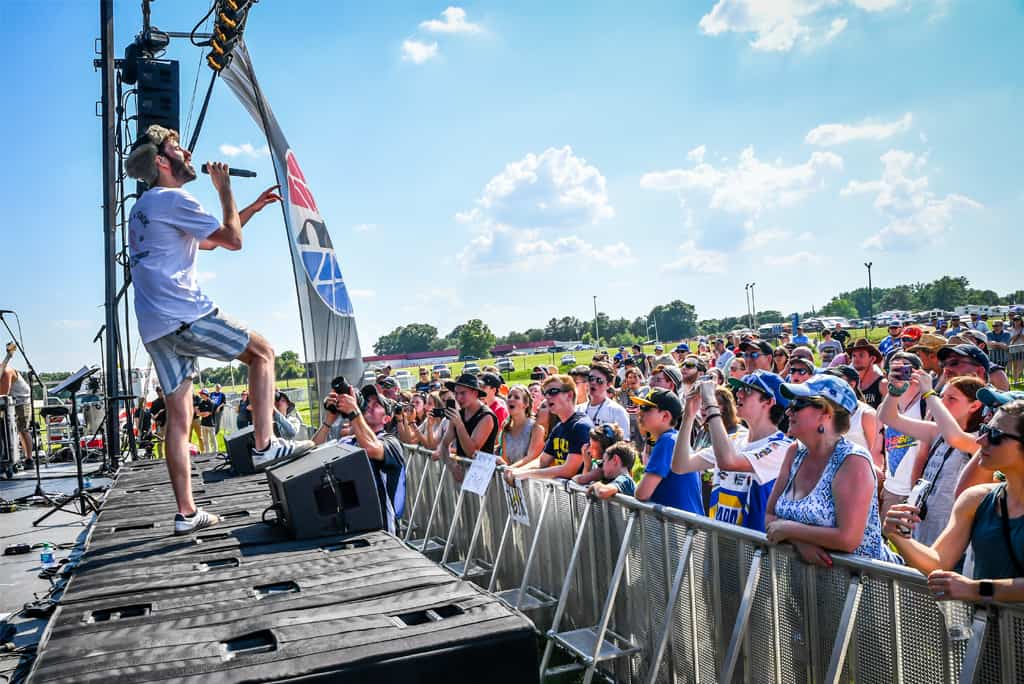 In addition to races, be sure to catch practice and qualifying sessions. Plus, CMS leads the industry in pre-race entertainment, so you’ll want to arrive early to witness breathtaking flyovers, driver introductions and live music by top acts. You’ll spend the entire day outdoors, so wear comfortable shoes and bring sunscreen! 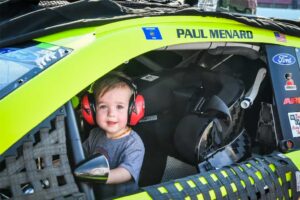 Ear protection is also a must. With Fanvision, you can control the noise and keep up with your favorite driver. Rent one at the track before the race and watch the action like in-car video on the device’s screen and listen in with the headset to hear the team’s communications when on track. Don’t have a favorite driver yet? Choose one to follow and make it more fun!

Upgrade your experience with options like the Pre-Race Track Pass which allows you to walk on the track before the race, get you access to the pre-race pit party and admits kids 13 and under free with an adult! Call or visit CMS online for details on ticket packages, additional upgrades and other deals. Already have tickets? Download the CMS app for all the information you need such as schedules, real-time updates and helpful track map.

Come for the adrenaline-pumping NASCAR events, stay to explore motorsports museums and more! 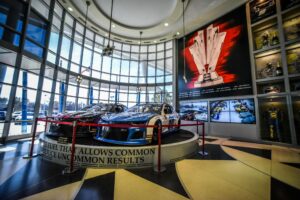 A true bucket list destination for race fans, Cabarrus County is the only place on earth where you can tour or experience an event at Charlotte Motor Speedway, step inside NASCAR Race Shops, tour legendary driver Dale Earnhardt’s hometown and be immersed in the sport’s history at the NASCAR Hall of Fame—all in one visit.

You can even get behind the wheel yourself with karting at K1 Speed and stock car ride and drive experiences. Combine these high-octane adventures with car shows, motorsports museums and more. Less than a mile from Charlotte Motor Speedway, get a glimpse of movie and motorsports history at Morrison Motor Car Museum where race cars from the film “Talladega Nights” are on display. A short drive to Earnhardt’s hometown of Kannapolis, included on self-guided tour “The Dale Trail,” takes you to Curb Museum where motorsports collides with North Carolina’s music heritage. 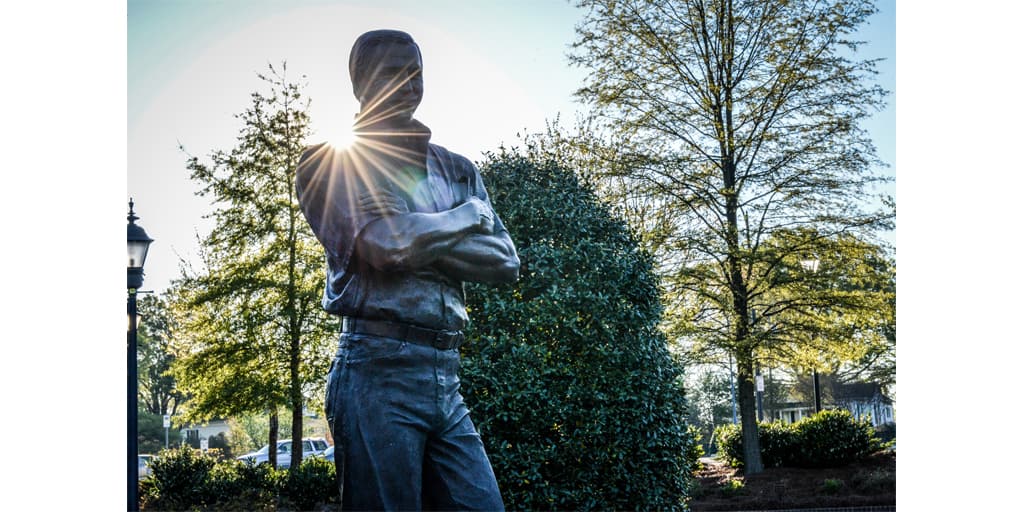 Along with these racing attractions, Cabarrus County is home to even more adrenaline-fueled activities like indoor skydiving and trekking through underground mine tunnels at Reed Gold Mine – home of America’s first gold discovery. Add endless shopping options, local places to eat and drink, and family fun at spots like SEA LIFE Aquarium and you’re on the way to one unforgettable adventure.

Get inspired by browsing the Cabarrus County, NC Destination Guide and start planning your trip now with these Places to Stay. Camping is available just outside of Charlotte Motor Speedway and there are over 30 hotels in the area.

Have questions or want to learn more?
We’re always here to help! Stop by or call the Visitor Information Center at 800-848-3740. For answers on the go, connect with @ExploreCabarrus on social media using #ExploreCabarrus.